I wrote this in April 2014, about four months after Darcy’s arrival. Updates are in brackets. I thought it was worth a share.

“The first child gets bathed everyday. The second child gets bathed when they smell,” the pediatrician joked at the one week well visit. But it was a half-joke. I laughed but I thought (rather arrogantly) the second child will be bathed everyday as well. Two days later I kissed my baby on the neck right beneath her ear ready to inhale that delicious new baby smell and got a whiff of cheese. Yes, breast milk had built up in one of the many folds of my newborn’s neck and was fast turning into “breast cheese.” Hadn’t I bathed her just yesterday? No, it had been days. And when I resolved to bath her that day, I peered at my house through bloodshot sleepless eyes and I sighed. She would need a bath in the near future. Yes, “in the near future” was good enough. 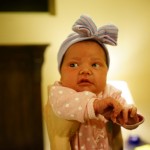 But Darcy is the second child. Darcy’s arrival in our lives has made me reflect on what it’s like to be second, to come into the world when the veneer of new parenthood has dulled just a bit.

By virtue of her birth order, Darcy gets a mom whose attention is split, grandparents who are happy she’s around but not as giddy about her, and a brother who loves her so much he could just squeeze her to death. Seriously, we call Jackson “Lenny” from Of Mice and Men. He’s just so happy she’s here he can’t even handle it. And he wants to rock her and squeeze her so hard that it’s almost violent. In his little four-year-old brain baby Darcy is the newest love of his life but also the reason his whole world has crumbled. One day I caught him playing Wreck-It Ralph on his iPad. He readily assigns real people to the characters in games. Darcy was Wreck-It Ralph. He sang happily, “Here comes Baby Darcy. Here to ruin everything.” 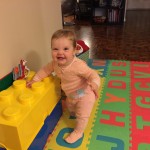 However, Darcy’s whole life experience, especially in these early years, will be informed by her being the second child. Today, I’ve already interrupted two of her naps to take her in the car for Jackson’s activities. I never woke Jackson from a nap.  If Jackson wasn’t awake yet, we didn’t leave the house yet. We ate at restaurants according to his schedule, arrived late to family events,  and left early so he could get to bed.

You would think my new baby would be terribly cranky because of her interrupted sleep, right? Yet after four months of being woken up, Darcy still wakes with a smile and she wakes easily. Then she drifts back off in the car seat.

[Update: At around 6 months, Darcy’s naps and nighttime sleep became an issue. I refer to the 6-9 months as the Dark Ages. She’s since been sleep trained and I bow at the throne of Weissbluth and Ferber. But that whole nap whenever thing got hairy real fast.]

Of course because I wake her up so often, I feel guilty. This guilt creates a habit that I never indulged with Jackson. Darcy often takes naps right on her Boppy pillow after eating.  She finishes nursing and half-drunk on mother’s milk, drifts off for 45 minutes or so, catching up on that nap that was happening when I woke her for Jackson’s soccer practice. My first-born never got this treatment. Driven by anxiety and a competitive spirit, my child was sleep trained perfectly. I once put him in for a nap while friends were over for lunch. It took all of two minutes. The other mom leered at me, “He’s down? Are you serious?”

Essentially what I see coming together is exactly what the birth order book predicted. Darcy is simultaneously easy going and yet thinks the entire world revolves around meeting her needs.  Everyone, young and old, should be delighted by her little smile and gorgeous eyelashes. She has no worries. It will all work out. After all, there are three people bigger than her who will make it so.

Seeing how Darcy’s little personality form has made me more empathetic to my younger sister’s experience as well. As the second child, Maggie was probably always waiting for Mom to finish something, her schedule always planned around my own.  Only when Darcy cries does she have my unfettered, immediate attention. Of course I play with her but it’s not the same as Jackson whose every blink and smile was observed, commented on, recorded on film even.

I relayed this revelation to my sister about a month after my daughter was born. I expected to be met with a defensive response but she seemed pleased. Her older sister finally “gets it.” Is there no greater satisfaction for a second child then to have achieved the respect of the eldest? I see it already in Darcy. There is no one in the world, including myself, who can light up her face like her brother. Her little eyes follow him as he putters around the room with his toys and her whole face reacts when he bestows some of his charming laughter on her. 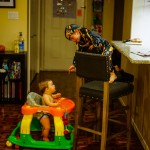 [Update: She is still enamored with her brother. However, she is now wary of him. And I think she realizes that crying gets him in trouble.]

I think most moms would agree. You go into a second pregnancy wondering how you can possibly make more room in your life and your heart for a new baby when you already love your first so much. But it happens. It’s not that the space in your heart reserved for your children divides. It’s that your heart itself grows. You love them both. You love them differently but you love them the same—passionately, assiduously, wholly. It’s not about more or less love. It’s about time. Isn’t it always?