My latest teleplay is called NO REP! and I’m really excited to get to work on this one. I’ve always wanted to write a mockumentary style piece and I think Crossfit provides the perfect vehicle for me. And since Crossfit has lots of vaguely sexual nomenclature, there’s plenty of vaguely sexual language in my one sheet. Double entendres, anyone? Nah, those are too much work. Single entendres all the way for me.*

Here’s the one sheet.

First rule of CrossFit:  Always be talking about CrossFit!

Logline: Three middle-aged townies manage their CrossFit box and each other. Will they establish dominance in the fitness world or be the laughingstock?

Synopsis: Fitness professionals are part of our everyday lives. There is the muscled personal trainer, a bro who can sculpt your lumpy bod while psychoanalyzing your boss.  There is the fascist cardio queen who shouts from the dais of an overpriced spin class. There is Zumba cheerleader—her energy never wanes and her hips don’t lie. And then there’s the CrossFit coach…the Scientologist of the fitness world.

Meet Mike, Dick, and Anthony—three friends who open a CrossFit “box” together.

Recently laid off from his job and separated from his wife, fitness enthusiast Mike Davenport decides it’s time for a pivot. He gathers his best friend Dick Pound and third-wheel Anthony McPhail to open a gym and spread the gospel according to CrossFit. The gym is the perfect solution to ex-Marine Dan’s midlife crisis. And tinder-obsessed meathead Anthony knows plenty of gym rats. In fact, it’s Anthony who introduces the guys to “firebreather” Chris Miller. This empty-headed Adonis is the box’s only chance to secure a spot at the coveted Reebok CrossFit Games. 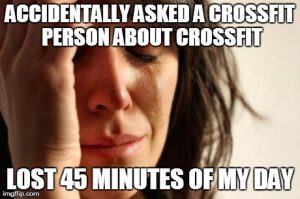 However, these townies are newbsauce when it comes to running a business. And their small, insular neighborhood of Accident, MD has never seen CrossFit before.

What could possibly go wrong?

Will Dick keep his military background in check? Will Anthony refrain from awkwardly hitting on female members? Will Mike get his shit together and train the future CrossFit champ? And what happens when female triathlete B.J. Weaver joins the man cave? Will the guys realize in time that their best shot at the CrossFit Games rests on her sculpted shoulders? Can Team Crossfit Accident beat the powerhouse from Iceland?

NO REP! is Best in Show meets RENO 911! meets The Office. This mockumentary style show will feature improv character interviews and physical comedy at its best. Transmedia components include: daily WODs via Snapchat with Dick, videos of epic gym fails hosted by Anthony, and Mike’s online Paleo food diary. Come explore the cultish world of CrossFit and be the best…at exercising.

*The “single entendre” is not recognized by the Oxford English Dictionary.