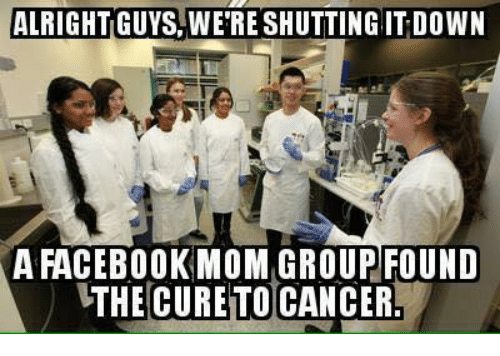 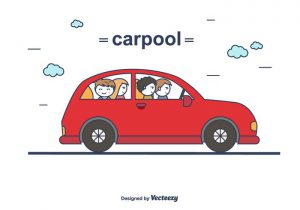 I’ve written a short story version of this and submitted it to McSweeney’s. If I get published, we will all be famous.

These words, spoken by lyricist and philosopher and house renovator Vanilla Ice, are basically the main tenants of any good Yahoo or Facebook group for moms.

We help each other find and vet services and contractors and landscapers.

We support each other when someone writes the classic vulnerable mom post.

I lost it today in the Chick-Fil-A parking lot.

We all did, sister. Mommin’ ain’t easy.

We forgive each other when someone asks who the HVAC guy in the neighborhood is…for the hundredth time.

But every once in awhile, there’s a post that evolves into a lively discussion but eventually goes semi-rotten. A dialogue so intense and laden with passive aggression that the post begets so many other threads and side conversations via text and snarky asides at school dismissal.

That conversation happened in the last 48 hours on my beloved mom Yahoo group. It was about children. It was about safety. It was about what moms everywhere know…this is how things should really work, dammit.

Because if moms know one thing, it’s that moms are always right.

[Names changed to protect the innocent.]

It all started with Debra. She decided that she would create a list of suggestions (read: rules) on how carpool at our elementary school should work. Debra doesn’t work for the school. But she knows what we all know. The drop off and pick up carpool lines are a shit show.

This shit show was mitigated for a brief but peaceful period by our crossing guard. I wrote about him earlier this year. But I have since changed my opinion and he is now directing traffic in the menagerie. (I can’t go into this right now so read the other blog post here.) I call this time of efficiency and tranquility the Golden Age.

We’ll get back to the crossing guard in a hot minute.

Debra’s initial “suggestions” post was followed by the expected “murmurs of agreement.” A few bipartisan, concerned mothers cosigned Debra’s list of rules. A resounding yes to what we all already know. Carpool is a dang shit show, y’all. Someone’s gonna get hurt. 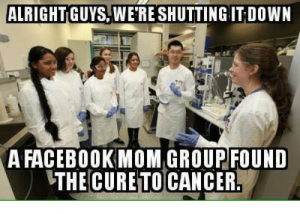 The murmurs of agreement, however, quickly gave way to more complaining and add-ons to the original list. And because we’re really lucky, the accusations began.

You know who’s to blame for this? The dads!

Totally. They are always in a rush.

This accusation holds some water. I’ll admit that the times when some expletives have left mouth during carpool, it has been because a dad cut in front of me. Ford Tough! Outta my way. Wife’ll kill me if these kids are late.

(sings) Jesus, take the wheel…take it from that dad.

After the group impugns a faceless group of fathers, there is the juicy gossip part of the thread. This time, someone (a dirty whore someone) told on our beloved crossing guard for directing traffic. He’s not to direct traffic. He’s ONLY to cross the children safely. And if he does it again, he’s going to be fired. The Golden Age has officially given way to the Dark Ages. 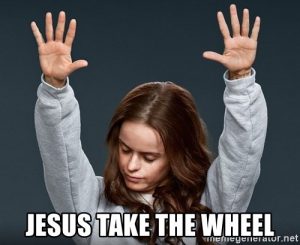 What? The crossing guard? He’s the God of drop off!

It’s the first time I’ve felt safe in my own neighborhood in years.

I bet an old person called.

Be vigilant. The traitor is among us.

In the small world of mom social media groups, if there’s anything worse than a dad who doesn’t read the damn school emails, it’s the old people. They sit there in their houses, watching The Price is Right, drinking that Hate-or-ade. They hate us because we are young (cough middle-aged) and beautiful (cough access to botox).

After the group slanders the old people—the people who are surely not on a Yahoo group because they are too old—people start with the proposals. But proposals come from people who have absolutely NO INTENTION of following through. Someone (never the author, no) should call “the city” or “the district” about getting a “sign.” The author of these emails is the person who wants to delegate. She acts like she calls “the city” all the time. Just call “the city.” They will handle it. So easy. Like ordering from Pizza Hut. I just used my “the city” app and ordered new street signs last Tuesday. Duh. If only one of your morons would listen to my brills idea!

Well, when I call “the city” tomorrow, it will be to erect a bronze statue for you, fellow mom. I’m sure they already have one in the works. Or they don’t. Because you’ve never called “the city” in your life. If you had to deal with the death by minutiae that is calling “the city,” you would never suggest it on a mom email thread. Sit down!

Yesterday, we enjoyed an added bonus to the “call the city” reply. This one came from someone who styled herself as Ms. Husband’s First and Last Name. We’ll call her Nancy. Nancy works at another school and thinks we moms should have our principal call their principal because their carpool line is far better than ours.

Sit down, Nancy! A cattle drive is more streamlined than our carpool. We know other schools probably have better carpool lines. Also, the school mentioned has like double the students. Logic would dictate that they probably have a decent system. With almost 1,000 elementary children going to and fro each day, that’s not a carpool anymore. That’s straight up crowd control. I’m surprised they haven’t hired the Hells Angels to keep order over there.

The best part about Nancy is that she actually called her response a “quick fix” and a way to stop all the emails. I repeat, sit down, Nancy!

Then comes the climax…where conversations like this always go. And my personal favorite. Like I get the popcorn out after this reply is sent. A working mom invariably gets all fired up about her clogged inbox. We’ll call her Janice. Janice sent the “everybody stop hitting reply all email.”

This response was followed by some #shade. And I read the replies to Janice while shoving popcorn in my mouth. Same as when I watched Get Out. Shit just got real. Southern-style real.

I mean, come on, Janice. If we can’t see the “reply all” button, maybe you should look a little harder for the “delete” button. Also, if you are emailing everyone, aren’t you part of the problem? Sit down, Janice!

Then the emails come full circle. Debra, seeing the mess she’s made, emails again. Like Victor Frankenstein looking at his mottled monster in horror, she must email again. She must reiterate the main point of her original email: safety, cars, children.

But maybe Debra hasn’t read Frankenstein. Spoiler alert: The monster has children and joins a yahoo group. So sit down, Debra!

I got the fully fictionalized version of this published in a REAL literary journal. Read it. Do it now!