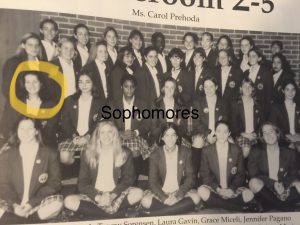 Sophomore Homeroom in the Art Room. Lots of doodles during announcements and a big win for the Christmas Decorating Contest that year.

I love titling my blog posts.

So my parents live here now and with them came many boxes from their attic back in Malverne, NY. My dad dropped off said boxes the other day.

One was of books from college. Boring. Straight to Good Will.

One was filled with American Girl Dolls. More on this another day.

One was my wedding dress.

And one was a box of memorabilia from sophomore and junior year of high school. Bingo!

I suppose I could write a sappy post about showing my children my wedding dress and veil. After all today is our 13th wedding anniversary. And I could write about how I choked up thinking about that beautiful day and how it led to my beautiful children. And how Darcy will wear my veil one day at her wedding.

But that would both be a bunch of lies and lame. Let’s talk about some of the stupid stuff that was in my high school box. Like the bottle cap and meticulously saved label from a bottle of Olde English. For those of you who don’t know, Olde English, or O.E.,  is malt liquor that comes in 40 oz servings. You can get it at the 7/11 on Franklin Avenue if you ask the derelict guy who hangs out in the parking lot to buy it for you. That is, if there are no Malverne PD getting coffee. Those guys are VERY attentive to teens at 7/11. #thankyouforyourservice, our heroine hash-tagged begrudgingly.

Darcy was with me as I sifted through trinkets and notes I had once held so dear. All of a sudden, Darcy hands me something. She’d been chewing on it. It was a red candy-colored condom. She held the wrapper in her other hand. I know what you’re thinking. Whoa, Kristin was getting laid in Sophomore year. But no, perv. And if you’re my parents reading this, you should know that I have never known the touch of a man and both my kids were immaculately conceived.

Muno from Yo Gabba Gabba.

Seriously, I actually have NO IDEA why I saved a red candy-colored condom. I can only assume this condom was a gag gift of some kind. Probably from one of my demented best friends. (Hello Laura! Hello Terry!)

Either way, Darcy handed it to me and said, “this is gross. It’s not candy.”

“No, it’s not candy. Give it here,” I took it and promptly threw it in the garbage bag.

No, I would not be blowing up a condom for my 3yo to frolic through the garage with. I did, however, think that it would be awesome to dig up  her Muno figurine and put this condom on him #raincoat (Note: I didn’t actually do this).

Speaking of inappropriate things I don’t remember at all, let’s talk Barry Dickson. (I didn’t plan that his last name would be so ripe with meaning right after I talked about condoms but it worked so I’m going with it.) I found a birthday card from my friend Jen that was entirely about Barry Dickson. The card was an Ode to Barry and I had no idea who this man was.  After leafing through my sophomore yearbook, I discovered that Mr. Dickson was our math teacher. Maybe Jen had a crush on him and I indulged her with dirty jokes and double entendres involving math words like “protractor.”

But it wouldn’t be a stretch for me to have a crush on Barry Dickson. As any hetero girl who attended an all-girls high school can attest, when there’s no boys to pine for, the male teachers take over that space in your head. Barry is what passes for hot when there are no boys your age, lots of hormones, and pressure from Sacred Heart Academy to get into a good college–all shrouded in Catholic traditions. 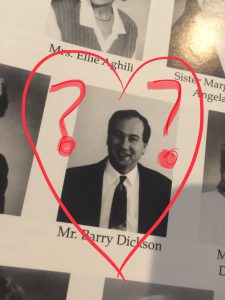 And Mr. Dickson was Jewish which makes him downright tropical in hotness. Because while it was never stated explicitly by any authority figure in my life, when you go Sacred Heart and all the dances/cotillions/proms which constitute your interactions with the opposite sex are with Chaminade boys, anyone other than Catholic reads as  FORBODEN and therefore extra sexy.

Mr. Dickson could eat meat on Friday. So exotic. He may as well have been a public school boy.

There was one teacher I remember thinking was cute. It’s Mr. Pierre-Louis. And he sealed the deal when the Hofstra University Jazz Band came to perform with him. And then he broke out into Scat singing. He was awesome. This was two years after Swing Kids. So bringing your college jazz band (college boys!) and then scat singing with them (WTF! He’s the band teacher! I didn’t know he could sing too!) and combining all that with Swing Kids (Christian Bale! Dancing! WWII Germany!)?

The experience of opening up a box of your memories and having no recollection or reference point for some of them was dizzying. Like a coma patient waking for the first time, looking at her husband and uttering, “Are you the doctor?”

Okay, it’s not that serious at all. And, upon further recollection, at 37 years old, I suppose memories of my sophomore math teacher have faded into the background in favor of memories of Jackson walking for the first time or Darcy sleeping through the night for the first time. The latter is not a memory but a fantasy.

And who has room for high school memories when Lake Highlands Soccer Association keeps changing the damn schedule?! Off to 3yo soccer!