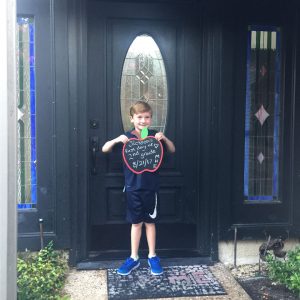 Jackson holds a chalkboard apple on his first day of second grade.

On Monday, Jackson started second grade. Actually, since he is the first-born, we all started second grade together. I fussed over the chalkboard apple and my subpar font. And his outfit. And his hair. And what do you put in the school bag? At least I had his lunch is down pat. Uncrustables & Capri Suns since day one of kinder. Lunch, consider yourself, phoned in. Judge all you want, readers.

Darcy spent the morning pissed that it wasn’t her first day of school. She is generally resentful of being the youngest and so she is always finding ways to commit family treason on special mornings like this one. Sidenote: Yesterday Darcy helped me start Jackson’s laundry. After diligently putting all his clothes in the machine, as instructed, she poured bleach on them and started it. While I applaud her self-direction here, she could have stopped after she completed her task and chosen NOT to be treasonous whilst my back was turned.

Anyway, we took Jackson in the classroom, did the requisite pictures, seat finding, etc. He seemed happy but a little tentative. We then made our the PTA coffee, said hellos, caught up with some friends, and fed Darcy a kolache. NB: A kolache is basically a large pig-in-a-blanket. Texans heart kolaches big time.

Darcy parked herself at the food table, grabbed a kolache (like a good native-born Texan), popped the breakfast sausage out of the pastry, took a bite, then popped it back in.

I was clearly the wrong person to get C.K. and I coffee since doing so took about twenty minutes. So much chit-chat. It’s a life skill. I have mad chit-chat skillz.  And I forgot my car keys on Jackson’s desk so I had to travel back for those. His teacher met me halfway, keys jingling in the air, a knowing look on her face that spoke, “You are the mom who will ask what I want from Starbucks and then completely forget or get my order wrong.” At least now she knows I am an overly apologetic hot mess. Better than me overachieving in these first weeks of school only to find out that it’s all downhill from Halloween.

Monday night I got to thinking about my time in the second grade. I sent a note to my future second grade teacher when I was still in first grade. I wonder if it was before or after I got in trouble for drawing privates in a marble notebook during recess. There were two other depraved kids there but I can’t remember their names or faces. So maybe I imagined them. And it was just depraved little me, sitting on the playground, doing some risque sketches.

Whether Ms. Triola knew of my first grade transgressions, I can’t say. But clearly what I wrote in that note I hand delivered to her classroom was enough. I wrote a letter. And I got what I wanted. The note told Ms. Triola that she was the prettiest teacher in the school. And that I loved her high heels. (She legit had pumps in every color.)

The high heels remained a point of fascination even after I’d gained access to the best second grade class Dutch Broadway had to offer. I remember walking up the stairs behind her and Ms. Triola wouldn’t put her whole foot on the step in front of her. So the sole of her impractically-high-for-a-teacher-heel would be on the step but the four inch heel would balance off the edge. It was a weirdly marvelous thing–and something I copied when I became a teacher years later. I soon learned that high heels were ridiculous to wear when you stood for most of your  work day. 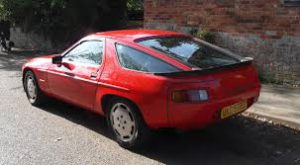 This is THE Porsche!

And I didn’t care. Just like Ms. Triola taught me.

She drove a Porsche. And even though it was an ugly 1980s Porsche, I could tell this vehicle was better than the Pontiacs and Datsuns that populated the rest of the faculty lot. A vehicle for someone who wore Porsche-like footwear.

I even heard my mother tell our across the street neighbor Rhonda that Ms. Triola’s “sugar daddy” bought it for her. I remember thinking that maybe my father would buy me a red sports car one day. And I would punch the gas over each speed bump in the school lot and completely ignore the school zone speed limits, just like Ms. Triola did.

At least I think she did. The car was red and therefore appeared capable of mildly illegal behavior.

Ms. Triola got married later that year–presumably to said Sugar Daddy–but I don’t remember her married name. It’s a law in elementary school that all teacher’s names are whatever they are when you first meet them. I can’t learn a whole new surname because of your life milestone. I’m seven.