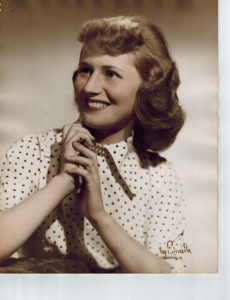 My grandmother died last month. Below is the eulogy that I wrote for her and read at her funeral…

Oma wasn’t your typical grandma/nana type. No smells of baked goods wafting from a kitchen window or overly saccharine compliments.

She was German-American, a child of the Great Depression, and she survived many hardships. Her way of loving was influenced by that.

But, make no mistake, it was a way of loving—of loving fiercely and steadfastly. You saw her love in her successful marriage, in her commitment to her children—one of whom was a special needs child. You saw the love in her attachment to her grandchildren and her delight in her great-grandchildren.

So this morning, let’s talk about her way of loving.

Oma was a character. She had spunk and fire and she was fun to be around. A quality of hers I’ll miss most is her sense of humor. Oma had this brilliantly irreverent sense of humor. And she had no qualms about employing shock value. No filter. That was her. If Oma had been born a bit later in the 20th century, I’m certain would have had her own Bravo TV show.

When a person has such a sense of humor, there’s a treasure trove of stories and memories to share. Unfortunately, not many of these stories are appropriate to share with a Pastor present.

But I’ll tell one.

At a holiday gathering a few years ago, we sat together and chatted about a new show on HBO—Rome. (This chat, of course, happened after I received the ritual $20 from her shirt. “Here. For gas. Or nails,” she’d say.)

We agreed that Rome was a great show—a little violent but a riveting political drama. But then we got to what Oma really wanted to discuss. Anyone who watches HBO knows the network is not shy about actors baring it all. Oma wanted to talk about James Purefoy—a particularly “talented” actor. My cousin Laura, who was maybe in middle school at the time, came over and tried to sit with us. I thought I would dodge this part of the conversation. But before Laura even sat down in the chair, my Oma promptly dismissed Laura with, “we’re discussingsomething private.” I’m unsure if she intended the double meaning there, but it wasn’t lost on me. 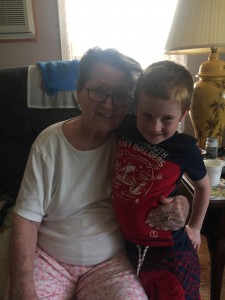 I giggled so many times when I talked with her. And because my grandmother was so candid and never prim or phony, you could talk to her about anything. She was real. She never tried to put on a façade. And I’ve learned a lot from her in this way.

Oma also grand-parented with a steady hand and a strict eye. If we did something wrong, we knew it. She held us accountable. Like when I was in elementary school and she’d lend me some of her coveted Disney VHS tapes. I believe she delighted in having a movie I’d love to watch and borrow but Oma would also threaten to charge a late fee if I didn’t return it in a timely fashion.

Or there’s the time when she and Opa babysat for Mags and I when my parents went to Jamaica. I cut Driver’s Ed one day and she made me vacuum the same room for like three days in a row. Of course as 15 year old, I felt this punishment was like I was in a chain gang. 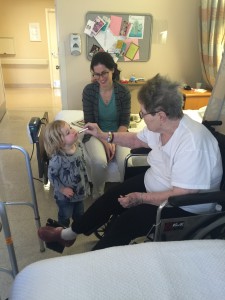 And then there’s the time, I cut rips in my jeans for a cooler look. She took them from me. I thought oh, no. What would she think that I ruined a good pair of pants? And I got some classic Oma side-eye for this. But a week later, I got the jeans back with perfect rips up and down the legs. My grandmother had painstakingly cut and pulled each thread so they looked like they were straight from a designer store. I didn’t realize it at the time but this task must have taken so long and been so tedious. This illustrates the kind of grandmother she was. Sometimes a bit rough in the delivery, but underneath that roughness was a gem of a woman and mother—a gem with diamond strength and clarity in her devotion to her family. Oma held us accountable. Because Oma was never failing in her accountability to her family. And she was unfaltering her accountability to me, to her other grandchildren, to her children and she was unfaltering in her dedication to my grandfather throughout their 63 years of marriage.

I’ve just started a book called Present over Perfect—it’s a bible study written by a mother in her thirties for women at my age and stage. It invites mothers to be present and not strive to be perfect—something mothers often try to be. It says to live with intention and soulfulness. The feeling of love and connection with family and friends will come from that intention, that presence. Oma did this. And she didn’t need a Wednesday evening Bible study to remind her to do it. She was always present. She was always there at her home on Norfeld Blvd until she passed in her bedroom on Monday. When I called to chat, she was there. But of course, after about ten minutes, you’d get “Okay, I’ll let you go.” 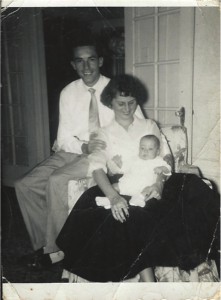 Well, now it’s up to us to let her go. We will revel in a memory of a woman who was devoted and fun and anything but cliché. She set an example as a grandmother and as a mother and as a wife. Her marriage to my grandfather is an example to me and my husband everyday—a lesson in devotion, in accountability, in faithful love. And I know I can move forward today knowing that I am a better woman for having known and loved my Oma.